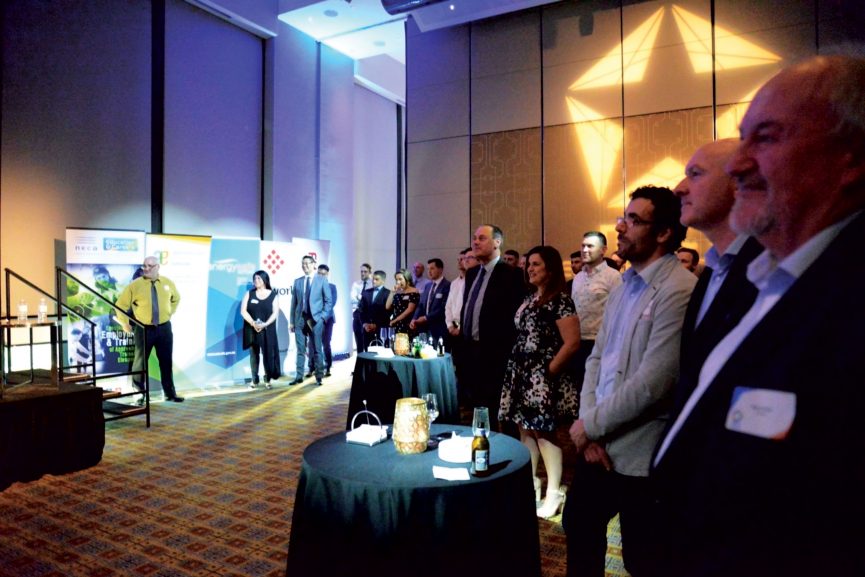 The 20th annual NECA Education & Careers Excellence Awards were celebrated on Tuesday 29 October 2019 at Crown, hosted by two NECA Education & Careers staff who work closely with our apprentices and trainees. Teacher Nick Oakes and GTO/Return to Work Coordinator Roxie Di Pastena spoke from the heart of the company as we honoured our apprentices, trainees and host employers.

Chairman Steve Herbert reflected on the past year’s achievements, particularly NECA Education & Careers being finalists for Small Training Provider of the Year at the Victorian Training Awards and scoring above the benchmark for every measure in student and employer satisfaction surveys.

The awards began with the start of the electrician’s journey: the pre-app. Lewis Fraser won Pre-Apprentice of the Year for his high marks and teamworking ability.

Mitchell Allen was awarded 1st Year Student Apprentice of the Year, complimented for his contributions to his classes and helping others.

2nd Year Student Apprentice of the Year Nellie Baker was commended for her work with advanced PLC programs. NECA Executive Director Pawel Podolski commented as he presented the award that anyone who could program was a deserving winner.

The next award was the most special, in memory of beloved NECA Education & Careers teacher Kevin Stevens. Kevin’s son John spoke about his commitment to everyone in the electrical industry, including starting the first program to encourage female apprentices. Winner Nathan Alickolli was stunned, saying that he really didn’t think he would win. 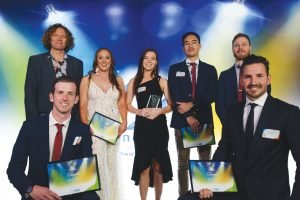 Trainee of the Year was awarded to Emily Brown, who followed her Business Traineeship with a Certificate IV and Diploma.

Our Tasmanian apprentices were represented by NECA Tasmania Apprentice of the Year winners Alex Findlater for Commercial, and for Industrial Marek Porter, who had also won at the Tasmanian Training Awards.

Next, a reliable, can-do attitude got Emily Cruickshank across the line for Junior Apprentice of the Year.

Taylor Palmer won Senior Apprentice of the Year in a close contest, with all finalists being given an honourable mention.

Teacher of the Year went to Nick Oakes for the second year running, to the delight of the staff and apprentices who have worked with him.

As the formalities concluded, ventriloquist Dean Atkinson had guests in stitches when he involved members of the audience in his act.

Congratulations to all the finalists and winners for their efforts and achievements!

Teacher of the Year – Nick Oakes