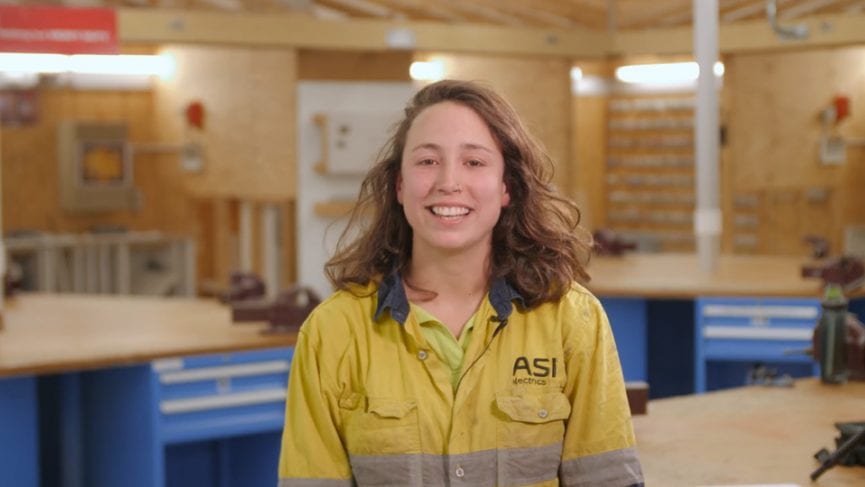 Many of the usual opportunities to celebrate the achievements of our apprentices and trainees have been postponed or moved online, but you can read about them here!

Nellie Baker was one of three finalists for Apprentice of the Year at the 2020 Victorian Training Awards, selected across all apprenticeship fields.

Nellie was also voted the People’s Choice Award for Apprentice of the Year.

“I’ve been quite lucky to work for a company like ASI and to go to a school like NECA Education & Careers, because I have actually been really supported, as a female in the trade, and I think both of those value the perspective that someone of a different background can bring in terms of diversity.”

At trade school Nellie has been recognised by her teachers with nominations for the NECA Education & Careers Excellence Awards leading to placing as a finalist in 2017 and 2018 before winning 2nd Year Student Apprentice of the Year in 2019.

Visit the Victorian Training Awards website to view all category winners and finalists.

NECA Victoria Apprentice of the Year

Nick Henricks won NECA Victoria 2020 Apprentice of the Year. He completed his apprenticeship with Stowe, where he has been given an ongoing position. At Stowe Nick developed not only his electrical skills but the organisational skills that go into running a project.

“I’d also like to thank NECA for supporting me through my education and for continuing to support apprentices.” Nick said.

The finalists for the NECA award should also be very proud of themselves: congratulations to Chris Nabbout, Quinn Dang Lynch, Ryleigh Dundon, Adelaide Campion, and Matthew Spithoven!

Joshua Hills won Industrial Apprentice of the Year, and Zac Kregor won in the Commercial/Domestic category.

Joshua Hills is close to completing his apprenticeship at Frontline.

Nathan Wherrett completed his apprenticeship with Stowe and now works at FIP Electrical.

Zac Kregor completed his apprenticeship with Stowe and now works at Ilec.