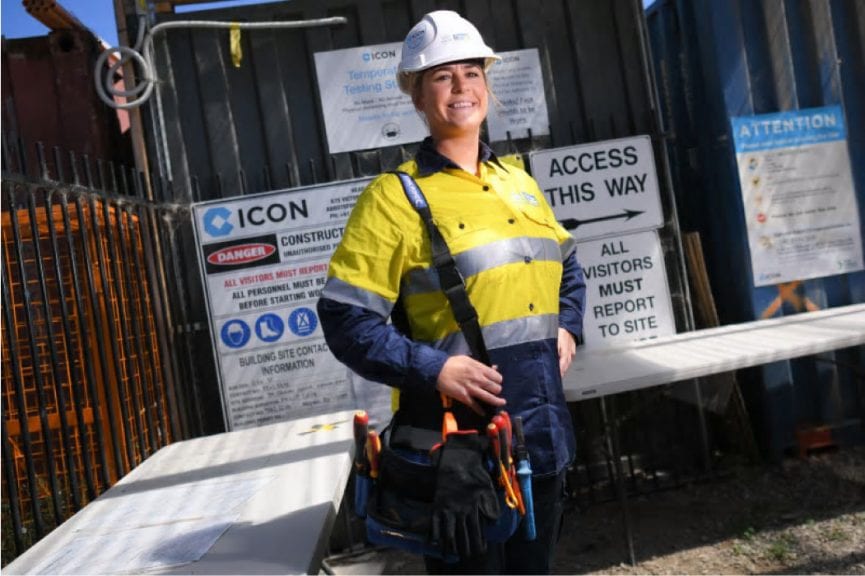 After working as an executive assistant in the corporate world for seven years, Samantha Wells took a pay cut and started an apprenticeship to become an electrician.

Now aged 33 and two years into her trade apprenticeship, Samantha is running cables through walls to connect the internet, speakers and audiovisual equipment on a redevelopment site in Melbourne.

As the years clocked by while working as an executive assistant, Ms Well said: “I reached a point where I thought, ‘Do I want to be doing this forever?’.”

According to the National Electrical and Communications Association there are tens of thousands of competent and experienced workers such as Ms Wells contemplating a career change to achieve job security and provide for their families.

“It’s simply not feasible for a mature-aged worker with a family, paying rent or a mortgage, to drop back to junior apprentice wages,” association chief executive Oliver Judd said.

“NECA is calling on the federal government to implement a rebate-style program that would allow businesses to claim back the wage difference if they’re prepared to take on a mature-aged apprentice,” he said.

In a budget submission to the federal government, the association has called for support to encourage more mature-aged apprentices into the electro-technology industry to tackle skills shortages.

Mr Judd said the end of JobKeeper payments at the end of the month would leave many people with an uncertain future at a time when Australia was facing skills shortages.

Ms Wells, from Avondale Heights north-west of Melbourne, said she had always been drawn to electrical work but had pushed the idea aside thinking it “was not for females”. Starting an apprenticeship at a mature age was also a daunting prospect.

“In the end I bit the bullet,” she said. “I was getting reasonable pay as an executive assistant, but I didn’t want to do it forever.

“Money is not the most important thing. I wanted a new challenge. I was something who couldn’t see myself at a desk all my life.”

But being older than the average apprentice, Ms Wells still had bills and a mortgage to pay and so scaled back her lifestyle.

“I sold my car and downgraded and shifted things around to make things work,” she said.

“I was lucky enough to have a partner to support me through it.”

Mr Judd said there were tens of thousands of competent and experienced workers contemplating a career change to achieve job security and provide for their families.

“It’s simply not feasible for a mature-aged worker with a family, paying rent or a mortgage, to drop back to junior apprentice wages,” he said.

“NECA is calling on the federal government to implement a rebate-style program that would allow businesses to claim back the wage difference if they’re prepared to take on a mature-aged apprentice,” he said.

Megan Lilly, the head of education and training at the Australian Industry Group, said it was important for people of all ages and backgrounds to be encouraged and eligible for apprenticeships.

“This includes considering different ways of making mature-age apprenticeships appealing options for employers,” she said. “Mature-age apprentices bring experience and maturity with them. This usually enables a shorted training duration. Wage subsidies or other incentives should be considered. However, strategies to assist mature-age workers to become apprentices must never be at the expense of opportunities for young people.”

A spokesman for Employment and Skills Minister Michaelia Cash said mature-age apprentices and trainees were part of the government’s initiative to boost apprenticeship starts with a 50 per cent wage subsidy of up to $7000 a quarter for the first 12 months. More than half the registrations under the program have been for workers aged 21 years and over as of March 10.

“As part of the Australian Apprenticeships Incentives program, there are also targeted incentives to encourage employers to take on mature-age workers into an apprenticeship,” the spokesman said.

“The Australian government will continue to consult closely with industry as part of the budget process.”

The Victorian government also introduced a program last year to help apprentices who lost their jobs during the pandemic to find new roles to continue their training.

Victoria’s Training and Skills Minister Gayle Tierney said the government’s Retrenched Apprentices and Trainee program had been successful in helping more than 250 apprentices and trainees displaced by the coronavirus pandemic to recommence their apprenticeships or traineeship with a new employer.

“In the Victorian budget 2020/21, we invested a record $1 billion to make sure the state has the training and skills system it needs to emerge stronger from the coronavirus pandemic,” she said.