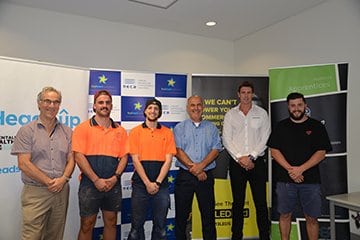 AFL star Justin Koschitze, Beyond Blue and NECA President John Cutler shared their experiences on tackling challenges, facing fears, working together as a team, celebrating success and looking out for each other every day.

Being an apprentice can be hard.
There’s a lot of growing up to do in a short space of time.
There are many different personalities to deal with both in the study and work environment, coupled with the pressure and expectation to achieve and thrive both in the classroom and on the job site.

It was identified late last year by one of the EOZ mentors that providing the apprentice groups with a motivational speaker throughout the year would be a great initiative that could give them the opportunity to see challenges in a different way, approach teamwork with a fresh enthusiasm as well as get some tips on setting goals, achieving goals and celebrating success.

Enter Justin Koschitze, an AFL veteran with 200+ games under his belt, including three grand final appearances. Now retired, Justin has entered the business world in the electrical industry as the Commercial Sales Manager and Brand Ambassador for Ledified Lighting Corporation.

At 197 cm tall, with 13 years of playing footy at the elite level, Justin naturally tends to attract attention wherever he goes, and for an hour on a Wednesday afternoon in March at the NECA Education and Careers Training Facility, he had a group of 70 apprentices transfixed as he shared his life experiences, and demonstrated to the electrical contractors of tomorrow how he uses the skills he learnt on and off the field in the AFL world as he forges a career after footy in the electrical industry.

Justin was delighted to meet everyone and spent some one on one time with a number of the guys after the presentation. “It’s a pleasure to be involved in an initiative like the Motivational Mentor event, and I see it as a way I can contribute to the ongoing health of an industry that is now very much part of my life post footy,” he said.

“So much of what I learned in my years on the field helps me in my everyday life now, and I want to be able to share that knowledge with these young apprentices to help them be the best they can, and be successful in their career path to becoming an electrical contractor,” he said.

The incidence of young males committing suicide is alarmingly on the increase in the construction and trade services industry, with the EOZ mentors indicating that in different times of stress and pressure throughout the teaching year, the mental health of the apprentice groups is one of their biggest concerns.

Michael O’Hanlon is the Workplace Engagement Manager at beyondblue and played a key role of in this inaugural event, with an insightful and engaging presentation to the group.

It’s a well-documented fact that many potential suicides have been averted by a simple question – ‘are you ok?’, so to be presented with some vital tools and tips that can be easily adapted in their everyday travels; on the job site, in the classroom and in their personal lives, was thoughtfully received by the group, and ignited a sense of mateship amongst them.

This initiative has the full endorsement of the peak industry body, and for NECA’s newly elected Victorian President, John Cutler, the subject matter has a very personal meaning.
“We lost one of our apprentices to suicide just before Christmas in 2013, and it changed the culture in my electrical contracting business forever’ he said. ‘I vowed that together with my team of predominately blokes aged 25 and older, that I’d implement change in our everyday work life,” said John.

“I’m proud to say that we are now a much more communicative group and identify signs of distress, angst and worry, and are not afraid or embarrassed to speak up about it,” he said.

John hopes that by sharing his tragic personal experience with the apprentice group that they can take steps to feeling more at ease in putting their hand up and asking for help if they’re having trouble with anything, or indeed if they see their work mates or classmates having a hard time.

“We’ve focused heavily on encouraging a new way of thinking and opening up to your work mates in a concerted effort to, as much as is humanly possible, prevent such a tragedy from happening again, not just in my business, but in the industry as a whole,” he said.

John’s honesty and obvious raw emotion about his young apprentice’s untimely passing really hit home with the group, so much so that you could have heard a pin drop.

The messages from the three presenters struck a chord on many levels, and it’s hoped that the program can continue to be developed in collaboration with beyondblue and Ledified, and with an injection of industry and/or corporate sponsorship, for it to be able to be presented at RTOs across Victoria.

The ultimate aim is to create a national program that can be adopted by each of the NECA State chapters and rolled out across RTOs nationwide on a year round basis.