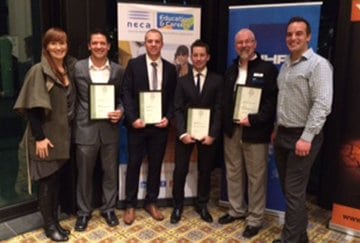 Eight electrical apprentices, who demonstrated consistent levels of excellence throughout their work and training, were recognised by the National Electrical and Communications Association (NECA), held on 23 July 2015 at Crown Melbourne.

The 2015 NECA Apprentice of the Year Awards is an opportunity for the electrical industry to officially acknowledge the talent demonstrated by the top apprentices across three industry sectors, industrial, commercial/domestic and communications. Guest speaker of the night was Mark “Bomber” Thompson, former Essendon footballer and coach. Mark played 202 games for Essendon and won “the most determined player” awards in 1984 and 1986.  Mark provided a motivational speech, he spoke about how his electrical apprenticeship assisted him in opening up his own electrical business at 21 years of age and how it defined his character that helped him on and off the football field.

The judges advised that during the course of the interviews it was obvious that all those on the short list were worthy of being there and they felt that all the candidates interviewed are a credit to themselves and their employers.

James Huf, employed by NECA Education & Careers was judged the best apprentice in the Industrial Award. James had shown dedication and determination to his studies and to his on-the-job competency. James revealed that he had a detailed plan for the future and the judges believed with his positive attitude and technical knowledge, he will achieve his goals.

Callum Ashby from Nilsen (Vic) Pty Ltd took out the award for second place in the Industrial Category, and Michael Clements from Downer EDI Engineering Electrical was awarded third place.

Lachlan Booth employed by NECA Education and Careers was judged the best apprentice in the Commercial and Domestic Award. The judges were very impressed from the outset with Lachlan’s approach to life and his trade, they felt Lachlan has a bright future in the industry and will go a long way.

Dexter Magpantay from Appselec had been awarded runner-up in the Commercial and Domestic Award, with Cameron Wilding from Downer EDI Engineering Electrical awarded the third place.

Luke Woollard from LANEC Services Pty Ltd was judged the best apprentice in the Communications Award.  The judges were impressed with Luke’s confidence during the face-to-face interview and with his technical knowledge and skills.

President of NECA Victoria, Mr John Cutler said the judges were highly impressed with the development of all those apprentices.

“To be named Apprentice of the Year in their individual categories is a credit to James, Lachlan and Luke. While there is only one winner in each category it must be said that to be a finalist in these awards really means they are all winners”, Mr. John Cutler said.

The judges compared the academic achievements and on-the-job accomplishments from all of the submissions and decided that these three were the best performing apprentices in Victoria. The Apprentice Awards are also held to recognise the important role employers play in training apprentices.

“It is also important to remember that it is not only the apprentices and training institutions such as NECA Education & Careers who are working to build skills in our industry. Businesses like Nilsen (Vic), Downer, Appselec, LANEC Services, and PSE Communications and Electrical also provide apprentices with the support and opportunities they need to develop the practical component of their trade. Without the assistance of the business community, apprentices would not get the on-the-job training that is so important to the electrical and communications industry,” Mr John Cutler said.