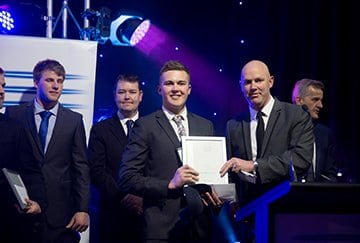 Both Tom and Jeremy have excelled during their respective apprenticeships.

Tom is hosted to Frontline Electrical; “he is a very mature and level headed apprentice.

He shows confidence ahead of his years and has a clear understanding of the path that he wants to take” commented NECA Education & Careers General Manager Careers Gary Vidler. “He is happy to take a lead role and step up when needed, he is considered a highly skilled and valuable part of the group and is well respected by his work colleagues.”

Jeremy is hosted to Power Play Electrical and has been with them for the full term of his apprenticeship.

Jeremy was identified early on in his apprenticeship as someone with leadership potential and plays an active role in most aspects of the company’s operation. “His maturity, skills and meticulous approach to his work has seen him held in high regard by his host employer and fellow workers”, stated Gary.

Congratulations to Tom and Jeremy for their achievements and efforts and thanks to both host employers for the support and opportunities they have provided to our apprentices.