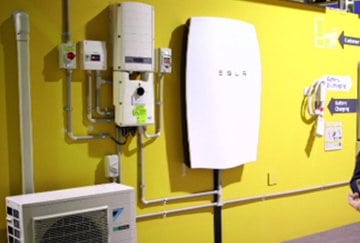 The first national audit of batteries that store solar power shows almost 7,000 were installed in Australian homes last year – and that’s predicted to triple this year.

Warwick Johnston from solar consultancy SunWiz carried out the audit by speaking to manufacturers and suppliers. “There was a significant fall in battery prices mid-way through 2016 and the popularity of batteries just exploded,” he told the ABC.

He said with South Australia battling blackouts, batteries would eventually be a “game changer” for Australia’s energy networks.

Solar batteries are expensive, but intense competition has brought prices down.

About 20 manufacturers are producing around 90 products for sale in Australia, with the cheapest battery retailing for $1,200.

He said there was potential for the energy stored in batteries to be put back into the grid for the public to use.

“I’d say three years is when we’d start to see that batteries are playing an important role in the network,” Mr Johnston said.