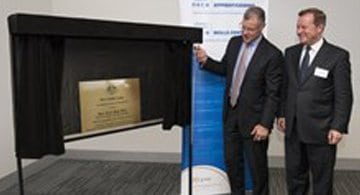 Friday the 14th March marked the official opening of the new $5.2 million NECA Skills Centre. The state-of-the-art facility was opened by the Honourable Peter Hall MLC, Minister for Higher Education and Skills, Minister responsible for the Teaching Profession.

The opening of the new Electrotechnology Training Centre is focused on providing electrical pre-apprentice, apprentice and industry based courses in a combined learning forum. The upgrade included:

The upgrade could not have been possible without the support of both the Commonwealth and Victorian Government.

The official opening was well supported with 370 degrees group board, NECA Councillor’s, Industry and staff attending.

Philip Green, CEO of 370 degrees group commented “It has been a magnificent journey for the board and management staff over the last 2 years. The outcome is a remarkable modern, well-equipped and cutting-edge Training Centre where electrical apprentices and electrical businesses can participate in high quality training”.

Of course the day was tinged with sadness, with the sudden passing of Kevin Stevens earlier in the week. Kevin’s family were in attendance and as Philip stated “your presence acknowledges the very high regard we have for Kevin, he was a highly respected teacher – absolutely one of the best – but he was also a friend and mentor to many throughout his long career in the electrical industry. Furthermore this was the place that he spent so much of his time doing what he loved, teaching, mentoring and inspiring young people”.

The Minister, who announced his retirement from politics, effective Monday 17th March, made mention of the fact that this would be his last official act and how fitting it was that it was in an environment that promotes skilled learning in the electro-technology area.

Upon reflecting on his youth, Minister Hall said “that it was one of his regrets that he hadn’t taken up a trade, unlike some of his close friends and he continues to realise the importance of having a focus on trade training, as NECA does, for the future of the industry in Australia. I commend 370 degree and NECA on taking the initiative to provide such a great new facility”.

A part of the ceremony included the announcement of two naming dedications in honor of those who have made a significant contribution to the Skills Centre, namely, Trevor Waterson and Brian Seymour.

“Trevor had a long and distinguished career as a teacher and manager both here and at other RTOs, however it’s his 8 years at the Skills Centre that we particularly remember him for. In that time he made an indelible mark, so much so that barely a day goes by without Trevor’s name coming up in conversation,” stated Philip. Starting as Training Coordinator he progressed to the role of Training Manager and under Trevor’s leadership the Skills Centre flourished.

Described as modest, professional and with an enthusiasm and sunny disposition that was infectious, he inspired both teachers and students. Unfortunately Trevor passed away in 2012 and he is sadly missed by all. Trevor’s family were in attendance and were deeply touched by the dedication.

Brian Seymour was the inaugural CEO of the Skills Centre after his long and successful career as an electrician and electrical contractor. “Primarily through Brian’s own efforts he not only established the campus but was instrumental in ensuring the growth of not only the post trade training area, but importantly the undertaking of apprentice training which is now a key part of the NECA Skills Centre function,” commented Phil Green.

Plaques for both the Waterson and Seymour Training rooms were unveiled along with a plaque commemorating the official opening.