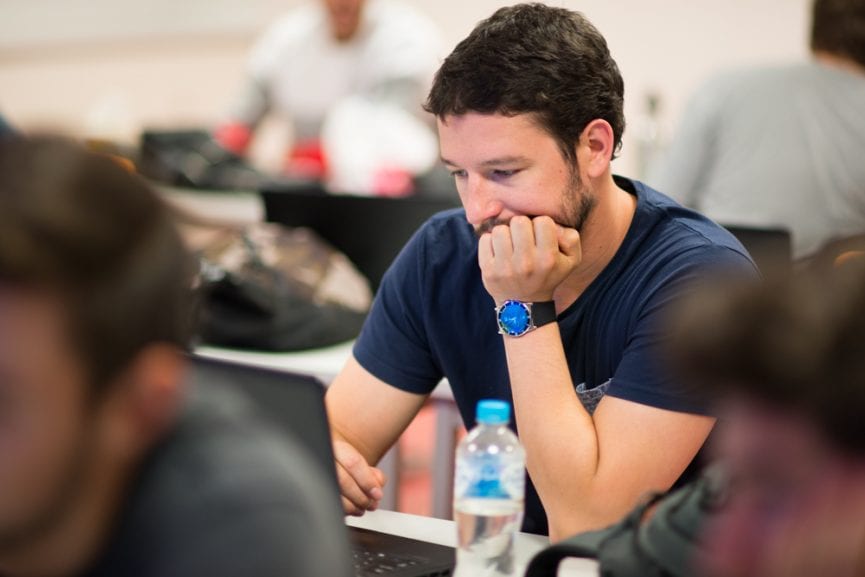 If you thought going to university guaranteed you a better paying job, new analysis shows this may not be the case, especially for men.

While many young people think going to university is the best way to ensure they can get a well-paying job, new analysis shows it may actually leave some students worse off.

A Grattan Institute report has found that some students with low school results would be better off doing vocational education than going to university.

The report noted that it was easier than ever to get into university and an increasing number of school leavers with very low entrance scores were applying to do degrees.

In 2018, more than half of the university applicants with an Australian Tertiary Admission Rank (ATAR) of below 50 were offered a place at university, up from 20 per cent before 2012.

Many have been seduced by the statistics that show university graduates have higher rates of employment and are generally paid more across their lifetimes. Others may not be sure what to do after school and are simply following their fellow students to higher education.

Often they don’t consider doing a trade or continuing their education through a vocational course at TAFE or similar institution.

However, this could prove to be a mistake, for men in particular.

The Grattan Institute found students with lower ATARs were more likely to leave university without a degree, and those who did complete their qualification had worse marks and failed subjects, which made them less attractive to employers.

Nine years after they enrolled, just half the students who had ATARs below 50 had completed their university course.

For students with ATARs between 50 and 59, just under 60 per cent had completed their courses.

Among law graduates, only one in eight with low-ATAR scores had managed to find work within four months of graduating, compared to two in three high-ATAR graduates.

A high-paying job was also not guaranteed for those with low-ATAR scores. 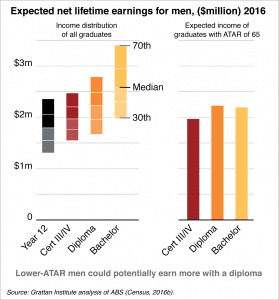 Especially for men, wages increase over time and peak at older ages particularly among professionals and managers.

Graduates who can’t move to professional or managerial work risk being stuck permanently below their earnings potential.

For lower-skilled sales and administrative occupations, wages peak when people are aged 35 to 44 years old and often decline after that.

The Grattan Institute found the lifetime earnings of a young man with an ATAR of 65 who completed a bachelor degree, was $2.2 million after costs and income tax.

But this was $30,000 less than a male who achieved the same ATAR but had done a diploma instead.

And it was also $400,000 less than the median income for all bachelor-degree graduates.

The good news is that a degree-holder still earned more than someone who finished their education at Year 12 or completed a Certificate III/IV.

The difference was also less dramatic among women.

For those considering a vocational education, the report found incomes varied depending on what subjects people chose to study.

Men with an ATAR of 65 who completed diplomas in commerce or engineering earned more over their lifetime than those who did a degree in science.

But those with a science degree earned about the same as someone with a diploma in IT.

“Schools need to give them better career advice alerting them to these possibilities — and governments should end funding biases against vocational education.”

Meanwhile, the picture for women is different and this is partly because the high-paying jobs available with a vocational qualification tend to be in the engineering sector and these are often male-dominated and inflexible in providing part-time work.

Instead university courses for teaching and nursing are popular for low-ATAR women and often lead to stable careers. These university students are unlikely to do better in a course at TAFE.

“For lower-ATAR men, a few vocational education courses would probably increase their employability and income. But for lower-ATAR women, higher education is almost always their best option,” Mr Norton said.

The report found that lower-ATAR students were not always being encouraged to consider better-paid vocational education alternatives instead of going to university.

“A good tertiary education system steers prospective students towards courses that increase their opportunities and minimise their risks. Australia’s post-school system does not always achieve this goal,” Mr Norton said.