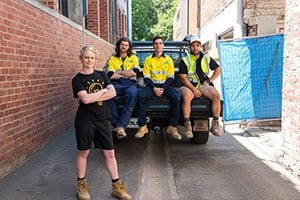 As part of the Women in Trade project, NECA Education & Careers recently caught up with some of the men leading the charge in changing the face – and gender balance – of the electrical industry.

Across the conversation was the attitude that when you hire women you are choosing from the whole population instead of just half, which increases the chance of getting the best people for the job. 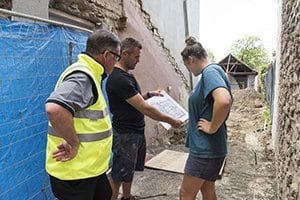 Mark Rademaker of Programmed said, “gender equality encourages collaboration and a creative environment, and in turn, a hugely successful industry.” This is backed up by findings from the Workplace Gender Equality Agency, an Australian Government agency for promoting and improving gender equality in Australian workplaces.

You may be thinking that this is something for big businesses to tackle, but 96% of Australian businesses only have up to 19 employees, as Mark pointed out, citing the WGEA. “It’s imperative we don’t ignore this category when working towards gender diversity,” he said. Dean Spicer of Recips said, “I think it certainly fits into any business.”

At a business level, gender equality improves performance and the ability to attract and retain employees. So how does the electrical industry stack up?

Women make up 10% of electrical services workers, and just 0.8% of technicians and trade in the industry. But statistics can seem distant from day-to-day work in an electrical business, so what has been the experience of working with female employees and apprentices?

Dean and Nick, one of our teachers who previously had his own electrical business, gave positive reports of hard-working female apprentices. Phil Green, NECA Education & Careers CEO, highlighted the potential different perspectives women can offer, saying: “in this day and age you need all these perspectives if you’re going to be creative, if you’re going to be innovative, if you want to move ahead.”

Speaking about the challenges to women entering the industry, and to women already in the industry, the consensus was that stereotypes and attitudes are a major problem.

Nick and Dean acknowledged that women in electrical are nothing new, recalling female apprentices from early in their training and careers who were doing a fantastic job. However, low numbers mean there are still people who are surprised to be on site with women and feel like they have to act differently around them.

Men and women come into the trade for many of the same reasons, and female apprentices interviewed at NECA Education & Careers have said that they just wanted to be treated the same.

There’s also the stereotype is that being an electrician is too physically demanding for women, but as Dean and Nick pointed out, if a man was too small for a particular job, you’d just give him a hand. They also discussed the fact that the variety in the industry gives people the opportunity to find their strength, whether it’s more demanding like pulling cable or more detailed like data.

Another stereotype is that women aren’t willing to get their hands dirty, but as Phil and Nick said, it’s important to make sure your selection criteria and interview process lets applicants know exactly what to expect, no matter who they are.

“I just want someone who has the same hunger that I had,” Dean said, and Phil commented that female apprentices often work harder to prove themselves.

Nick also said that hiring more women can be a point of difference for your business, talking about positive feedback from clients who were impressed at his employing women for the job.

Dean suggested taking on female apprentices or employees as a great opportunity for businesses to change some of the negative attitudes that may be around. “I’d say give it a go!”

Mark’s recommendation was to create a gender equality strategy for your business to act on these changes of attitude. “There are fantastic tools available online, like the one from the Workplace Gender Equality Agency that gives a good starting point and other resources.”

If you want more information, the WGEA has a number of resources including the Gender Strategy Toolkit, available at https://www.wgea.gov.au/lead/building-gender-equality-strategy, as well as tools specifically for small businesses.

NECA Education & Careers is committed to hire 15 new female apprentices this year as a step on our journey to gender equality. What is your business doing?