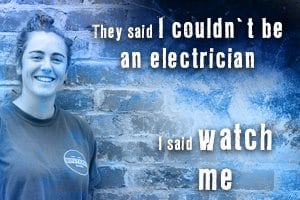 Here at NECA Education & Careers, we pride ourselves on getting apprentices into the industry, with all of the skills and experience that they need to succeed. A huge part of this is finding the right people, and that means opening up the electrical sector to the entire Australian population, rather than just 50 per cent, as is often the case in a traditionally male-dominated industry.

Getting more women into the trades is something that we’re passionate about, so let’s take a closer look at the stats and why female electricians and electrical apprenticeships are so important.

Women only make up 10 per cent of Australia’s electrical service workers.

Getting more women into the electrical trade

There’s no denying that electricians have traditionally been overwhelmingly male, but even today women only make up 10 per cent of Australia’s electrical service workers. This all starts from the apprenticeship level, with 2016 information from The National Centre for Vocational Education Research revealing that of the country’s nearly 300,000 apprentices across all industries, only a little over 80,000 were female.

However, there are all sorts of great benefits to getting more women into the trades, with the Workplace Gender Equality Agency finding that a diverse workforce encourages collaboration, creative employment and a healthier industry. Recognising this, there’s now a concerted push encouraging better representation in the trades, with government groups like Women NSW and non-profits like Women In Power all doing their bit.

NECA Education & Careers is doing its bit as well, and our team has committed to hiring greater numbers of female apprentices and ensuring they are provided with all of the tools they need to make their careers a success.

Check out the video below to see Alex, one of our female apprentices, share her story and experiences as a woman in trade.

Give our Student Services team a call on (03) 9381 1922 or drop your details below and we’ll call you, so we can help you reach your dream of becoming an electrician!

“My teachers are really helpful, and I view them as mentors with an open door to any problems I might be having. Studying with NECA Education & Careers has meant that I get a well-rounded education” explains Alex.

This kind of support is critical to electrical apprentices, and provides the safety net necessary to really give 100 per cent to the process. The issue of gender isn’t one that Alex took into account when deciding to pursue the career she wanted, and in her time studying and on job sites she’s found that she’s treated the same as any other third-year apprentice. The electrical sector is open to everybody, and stories like Alex’s show just how inclusive the industry can be.

“I’ve met so many people who say they want to do a trade and I’d say, ‘why don’t you, it’s great!’ Women can do anything, and the more women we get into the trade, the more evident that will become.”

The future of female electrical apprenticeships

A diverse Australian electrical sector is good news for everybody, and here at NECA Education and Careers we see it as business as usual to help people of all backgrounds gain the skills they need to succeed. From learning the basics through to getting hands-on with experienced electricians on real-world projects, an apprenticeship is the best way to get started, and with our team the process is simple.

To learn more about apprenticeships or women in the trades, get in touch with NECA Education and Careers today.